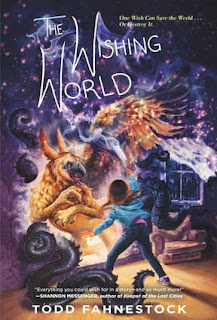 I (Holly Schindler, administrator of Smack Dab) got my hands on a copy of THE WISHING WORLD, and I instantly fell in love. This imaginative, addictive story is sure to sweep your young reader off his or her feet. (And if you decide to make this one a family read-aloud, I guarantee you'll be swept away, too...) I'm delighted to share Todd Fahnestock's writing journey:

This is one of my favorite stories to tell because this whole novel took me by surprise. The Wishing World is my first middle grade novel, and it was never intended to be published, not in the beginning, anyway:

It all started as a series of bedtime stories. I just wanted my children, Elowyn and Dashiell (at that time, ages 3 and 5 respectively), to go to sleep. Both have active imaginations, but Dash is a morning lark and Elo is a night owl. Her mind is alive with stories, and she’d much rather talk with Daddy than go to bed. Elo had my number (pretty much from the moment she was born). How could I resist a little girl, so unbelievably talented at age 5, who wanted to make up stories with me?

So I executed some parental aikido. I circumvented, giving her what she wanted and getting what I wanted at the same time. I started telling BORING stories. Smart, right? Boring story. She’ll nod off. What a great plan. What could go wrong?

Hugo the Turtle (who is not in the actual book) was the first Wishing World character, and I told the story in true stream-of-consciousness. Hugo lived near a weedy bank by a lake, and he slept upside down in a dent in the ground that fit his shell. He was slow and methodical, and he put the kids to sleep after ten minutes. But to intentionally create a slow story about a flat character, with no plot and no tension... Urgh! Nails on a chalkboard to a storyteller!

After a week or so, I reverted to type. (The Plan! Remember the Plan?!? Bad Dad…) I added Gruffy the Griffon and his two friends, Pip and Squeak. Gruffy was everything I loved in a hero: courteous, dashing, adventurous, noble. Pip kept the dialogue hopping with a high-pitched, sing-song voice, and Squeak added mystery by saying things the kids couldn’t understand but the other characters could.

This trio discovered the bell-bellied Bulwort at the bottom of the Booferous Bog. They narrowly evaded Gruffy’s parents during the infamous bedtime escape caper. They even went looking for Hugo the Turtle on a wisdom-gathering trip at that weedy bank near the lake. This visit kicked off the quest that eventually became The Wishing World. Gruffy, Pip, Squeak and Ripple visited the Sandspinner’s Azure City, with his life-sized sand castles. They shook hands with the Shake and Bake, walked through the land of the Leaf Laugher. By the time these four friends reached the Eternal Sea, Elowyn begged me to write the story down. By that time, I thought it might be a good idea.

I gave the story the working title “The Gruffy Book,” and wrote…nothing. The very first file I made for this book still just says: Write down the stories I told Elo and Dash about Gruffy.

The problem was simple: When I write I feel like an adventurer cutting a path through new country. But in this case, the adventurer became a glorified lemming, plodding in pre-made footprints. Yawn. I put the project aside.

But the oral stories continued full force. In fact, we took them on two road trips, one to Carbondale, CO and one to St. Paul, MN, to visit friends of ours with kids the same age as Elo and Dash. They all loved the story. My friends (and even some strangers who were close enough to overhear one of these story sessions in the park) told me I should write it down.

So I tried again, failed again. I stewed on that for a few days until the Big Idea hit me: I was going to put my kids into the story.

And so spunky, imaginative Lorelei was born, based on Elo, and I did something that she still hasn’t forgiven me for. I took her greatest fear and made Lorelei face it in Chapter 1. To this day, Elo refuses to read the first chapter and won’t stay in a room if I’m reading it aloud. But this was the piece I needed, and the rest of the story flowed like a river in flood.

And that is how The Wishing World came to be. There are videos on YouTube and on my facebook author page where I narrate this whole story, if you’re interested in seeing me tell it to the camera.

Thank you so much for inviting me to blog for you at Smack Dab in the Middle. I look forward to seeing you in Veloran. 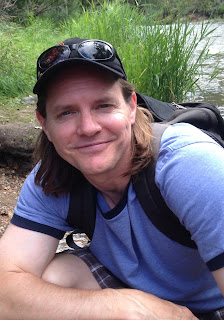 TODD FAHNESTOCK won the New York Public Library's Books for the Teen Age Award for one of his short stories, and is the author of the YA bestseller Fairmist as well as The Wishing World. Stories are his passion, but Todd's greatest accomplishment is his quirky, fun-loving family. The Wishing World began as a series of bedtime stories for his children.

Synopsis:
In the Wishing World, dreams are real. You can transform into your own hero, find wild and whimsical friends, and wield power as great as your imagination. But Lorelei doesn't know about any of that. All she knows is that a monster took her family.It happened during a camping trip one year ago. Hiding inside the tent, she saw shadows, tentacles and a strange creature. By the time she got up the courage to crawl outside, the monster--and Lorelei's mom, dad, and brother--were gone.Lorelei is determined to find her family. When she accidentally breaks into the Wishing World, she discovers a way. It's a land more wonderful than she could have imagined, a land of talking griffons, water princesses, and cities made of sand, where Lorelei is a Doolivanti--a wish-maker--who can write her dreams into existence.There's only one problem: the monster is a Doolivanti, too. What he wishes also comes true, and he's determined to shove Lorelei out, keep her family, and make the whole Wishing World his. To save them, Lorelei must find the courage to face him, or her next wish may be her last.