Every Christmas I am reminded of the many gifts I received as a child.  Our family was poor, in terms of monetary wealth.  My father grew up in a comfortable middle class family.  But he became disabled from injuries he sustained as a POW in Japan in WWII.  He was unable to work.  My mother grew up in poverty.  A coal miner's daughter and one of 13 children.  She was never allowed to finish school and had to work in a silk mill at fourteen.

Yet my sister and I were surrounded by wealth of a different kind. My father had a love of words.  He worked crossword puzzles, read mystery novels, and took great effort to make sure we spoke proper English.  My sister and I often teased him by saying "ain't" or some other awful word, just to see his reaction.  He never got angry; he just corrected us. Spoke to us as though we were adults.  Expected us to be able to use language comfortably.  Mom was a reader as well.  We always had newspapers and magazines around the house.  And, as soon as my sister and I learned to read, we got our own library cards.  Mine was worn and dog-eared from so much use.

We also had plenty of paper, crayons, markers, and pencils.  We'd spend hours at the kitchen table doodling and scribbling words, crude drawings and such.   As I grew, these primitive efforts were replaced by letter writing, diary entries, hopes, dreams.  And always, there was the constant love, support, and encouragement of Mom and Dad.  They never told me I couldn't.  So I believed I could.

What makes a writer?  I'm sure everyone's path is different.  Yet there is a common element.  Someone, somewhere encouraged our early efforts.  Found value in our verbal expression.  Made us believe we might have a gift.  A gift of words.

My parents died before I became a children's book author.  But there is no doubt in my mind, I wouldn't be one if not for the gifts they gave me as a child. 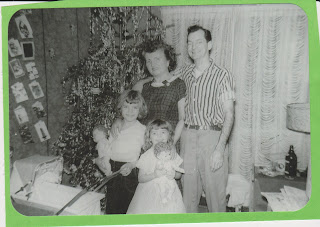