When we think of books with maps, we tend to think of sweeping fantasy novels. But I have found that making maps of the setting of my realistic novels has helped me to understand the setting and use it to my advantage.

The Friendship Riddle follows and ever-growing group of friends as they search for riddles around their town. These riddles are clues in a scavenger hunt whose ending they don't yet know. In order for me to visualize the scavenger hunt, I drew this map of the town:

I put a paper copy of the map on a tri-fold board and then plotted where each clue would be found and when. 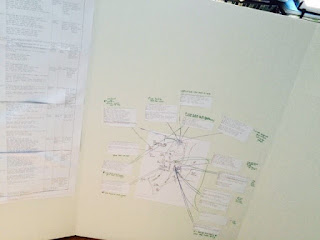 This allowed me to figure out how and when the kids could get from clue to clue. For example, a clue in the next town over required a trolley ride.

But drawing the map also helped me to see connection between characters. Ruth, my main character, lives toward the bottom of the peninsula. Melinda, her antagonist, lives in the next town, but directly across the bay. I realized that on a clear night, they could see each other's homes.

My current work-in-progress, The Firefly Five, is futuristic science fiction, but the setting is purposefully a neighborhood that today's readers will recognize. The kids all live on a cul-de-sac. I decided to draw a map of the neighborhood so I could see where the characters' homes were in relation to one another. As soon as I drew the donut of the cul-de-sac, however, I realized a possibility I had overlooked: the kids could pass through the center of the cul-de-sac. This quiet space allowed two characters to have one of their more important conversations.

This past year I had the chance to work with young writers at the Clinton School for Writers and Artists. As they developed their stories and worlds, I encouraged them to draw maps of their settings. They, too, found that they saw new possibilities in their work. It's a technique that teachers can use with their young writers, and, of course, one I recommend that writers of all genres give a try.
Labels: maps Megan Frazer Blakemore setting