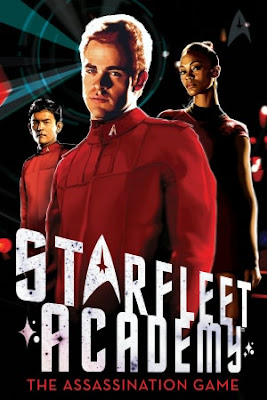 It doesn't really have anything to do with summer, except that it comes out this summer. Next week, in fact! I'm very happy to announce the publication of my first Star Trek novel--Starfleet Academy: The Assassination Game!

I've been a Trek fan for as long as I can remember, and I've been dreaming of writing an official Star Trek novel almost as long. I finally got my opportunity with Simon Spotlight's young adult series set in the world of the 2009 Star Trek reboot film. Mine is the fourth book in the series. Here's the jacket blurb:

The rules are simple: Draw a target. Track him down and “kill” him with a spork. Take your victim’s target for your own. Oh, and make sure the player with your name doesn’t get to you first. No safe zones. No time-outs. The game ends when only one player remains.

James T. Kirk is playing for fun. Leonard “Bones” McCoy is playing to get closer to a girl. But when a series of terrorist attacks rock the usually placid Starfleet Academy campus, it becomes clear that somebody is playing the game for real. Is it one of the visiting Varkolak, on Earth to attend an intergalactic medical conference? Or could it be a member of a super-secret society at the Academy dedicated to taking care of threats to the Federation, no matter what rules they have to break to do it?