June Theme: The Mountains in My Life by Trudi Trueit

Whenever I get the chance to travel, to get some time away from all that is routine and familiar, I go to the place where I am most inspired. I go to the mountains.


It doesn't make sense that I should love the mountains as much as I do. I’m not really an outdoorsy girl. I hike a little, but I'm not an avid climber, spelunker, zip-liner, bungee-jumper, or skier. I hate bugs. And camping. And heights. Being dangled from a wire high above the ground also holds little appeal, which may have to do with the fact that once, I was trapped on a chairlift on Idaho’s Schweitzer Mountain at sunset (Help! Can anybody down there hear me?). Oh, and on more than one occasion, I have experienced the thrill of ‘nature’ closer than I would have preferred. I give you Exhibit A, from last summer's mountain adventure   .  .  .

I have no illusions about the grand peaks I am drawn to. I am enriched by their serenity, but not fooled by it. I grew up in the Pacific Northwest, in the shadow of Mount Rainier where blue Volcano Evacuation Route signs dot the highways and school children have regular volcano evacuation drills. I am well aware that beneath gushing waterfalls and sun-dappled ferns the giant sleeps.

In the spring of 1980, the most destructive volcanic explosion in the continental U.S. occurred just a few hundred miles from my home. Mt. St. Helens erupted. I was a teenager at the time. Never before, and never since (thank God), have I seen nature unleash such raw, savage power.


The sheer force and extreme heat of the blast (temps. reached more than 600 degrees F) vaporized everything in its path. The once picture-postcard landscape was buried by massive lahars, or mudflows. Miles and miles of tall pines and firs were flattened like matchsticks. Thousands of animals were killed. Fifty-seven people lost their lives.

Nothing could have survived the hot waves of gas, ash, and rock, we thought. But we were wrong. Pocket mice, gophers, and other burrowing animals did make it. Within days, the first birds began returning to the blast zone—wrens and meadowlarks (one of my favorites). Nature was mending. Creating. Enduring. Just as she has done for millions of years.

More than 20 years later, I was able to share the heartbreak and the hope of Mt. St. Helens with a new generation in my book, VOLCANOES. 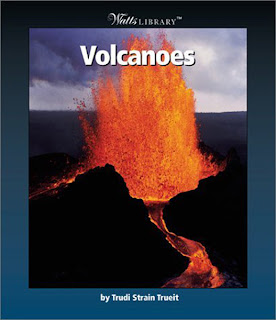 So, after all I have experienced, what is it about these dangerous beauties that attracts me?

Maybe I am drawn to them because I, too, am a mess of contradictions. Sometimes peaceful, sometimes fierce. Sometimes fearful, sometimes courageous. But always, surviving. Resiliency. I suppose that's what mountains teach me. Resiliency of the heart, mind, and spirit. Mountains test me. And up there, almost touching the clouds, I face my fears and learn to overcome them.

This summer we’ll be traveling to visit Whistler, B.C and Canada’s Coast Mountains. I am scared of the glass-floor gondola, terrified of the heights, and nervous about the bears.

And I can’t wait to get there.