Skip to main content
Labels
Posted by Alan Gratz May 21, 2012 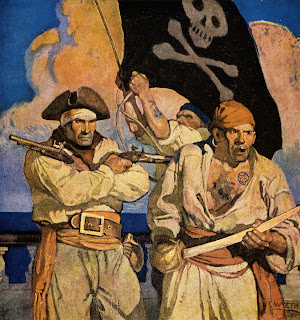 One of my earliest memories is of my dad reading to me. Before my bed time, my dad would call me in to my parents' room and we would sit on their bed and he would read me the next chapter of Treasure Island. It's kind of a magical memory for me, both because it happened when I was so young, and because I don't remember dad ever reading any other book out loud to me.

When I became a parent myself, I wanted to recreate that magical memory with my own daughter. I had read picture books to her for years, but starting our first chapter book together was a big deal. And what better book, I reasoned, than the very same Treasure Island that had so captivated me as a child? After considerable build-up ("It's a pirate adventure! With parrots and buried treasure! You're going to love it!") I pulled my daughter up next to me on my bed and started to read aloud to her as my father had.

And the book was terrible. I mean, it's a classic, and it's a great piece of our literary past, and it pretty much defined the way we still think of pirates more than two centuries later...but it was written in 1883, and it has all the problems of a book written in 1883. The dialogue is written in vernacular and is almost impossible to understand, it takes a long time for the story to really get going, and it's overwritten in that way of Victorian literature. In short, it's old. And while the "classics versus contemporary novels" debate is one best saved for another time, in this particular case, the story went over with an audible THUMP. It was a disaster.

After one particularly painful chapter, I turned to my daughter and asked, "So what do you think?" She answered, "I love it!" I was stunned. "Do you know what's happening?" I asked her. I'd barely been able to keep up myself. She looked sheepish and admitted that she didn't really know what was going on. "But I don't want you to stop reading," she told me.

And there it was. Finally I understood the magic behind my dad calling me up on the big bed to read aloud to me. It didn't matter what book I was reading to her. What mattered most was that I was reading with her, and sharing that special time. Come to think of it, it wasn't the story of Treasure Island I remembered most, it was my dad taking time to read a book with me. Any book.

"Tell you what," I told my daughter. "Let's stop reading this one and read something else together instead. Run to your bookshelf and find Harry Potter and the Sorcerer's Stone. You're going to love it..."

Happy Mother's Day and Father's Day to all the read-alouders out there!