Interview with Jessica Vitalis, author of The Rabbit's Gift

Short and sweet: Let's start with the elevator pitch for The Rabbit's Gift. 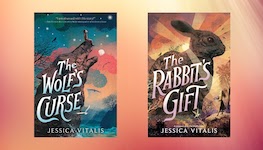 The Rabbit’s Gift is a unique spin on traditional French mythology; it’s set in a country where human babies are grown in cabbage-like plants and delivered by rabbits. When the trust between the humans and rabbits is broken, a desperate rabbit and a young girl to must find a way to work together in order to save their futures––and their country.

What was the initial inspiration for the book?

Since The Wolf’s Curse is a twist on Grim Reaper mythology, I always thought of it as my “death” book. I wanted to write a companion novel exploring the opposite, but a “birth” book didn’t feel right for the middle grade market. It wasn’t until a critique partner introduced me to La Fée aux Choux, a short, silent film based on the French myth that babies are grown in cabbages, that my companion novel started to take shape. (For the record, reader don’t need to have read The Wolf’s Curse to read The Rabbit’s Gift; though the two books are set in the same world, they each stand alone.)

I love the tone of the book. It reads almost like folklore. Sometimes, tone is intentional and sometimes, it's a happy accident. How did you find the tone for this book?

Trial and error! Since The Wolf’s Curse was a fairly dark story narrated by a snarky, omniscient wolf, and I was going for the opposite in The Rabbit’s Gift, I initially thought it would feature a sweet, omniscient rabbit. Unfortunately, the first few drafts sounded exactly like my Wolf was telling the story. (Thank goodness I have great critique partners who set me straight!) It wasn’t until I switched to first person that I found Quincy’s voice and the story finally took on a life of its own. But I also knew that I didn’t want to write the entire book from a rabbit’s perspective; that’s when Fleurine jumped in and the story really came together.

I love how you have literally placed such opposites in this story: nature / man, rabbit / human. And yet, the two worlds depend on each other. Can you tell us a bit more about that?

There’s a lot to unpack here, but I’ll do my best! The contrast between rabbit and human came about quite organically as I worked to create a companion to Wolf (which also featured a conflict between an animal and a human). I knew from the start that Quincy (the rabbit) and Fleurine (the human) would have conflicting goals; rather than label one the protagonist and one the antagonist, I thought it would be interesting to see if I could create a story that played with how perspective shapes the stories we tell, leading me to explore another interesting set of opposites: hero / villain.

As to the codependency between rabbits and humans: I initially made that decision in order to raise the stakes in the story; it wasn’t until I received my first edit letter and had to explain to my editor what I had in mind for themes that I really identified my underlying interest in exploring the symbiosis between man and nature. While humans and rabbits aren’t directly dependent upon each other in the real world like they are in my story world, The Rabbit’s Gift still provides an opportunity to highlight how important our relationship with the natural world is––and how our actions impact the rest of the planet.

We have dueling POVs here--which can be so tricky! How did you figure out how to differentiate between the two?

That turned out to be surprisingly easy—since Quincy and Fleurine have such different lives and different goals, their voices came to me very naturally. The harder part was figuring out how to juggle the dual points of view from a plot perspective. I’d always heard authors talk about not going backward in time and always using the alternate point of view to move the story forward, but I found that approach simply didn’t work for this story; it was important for the reader to know what both characters were doing as the story progressed.

When we spoke about your book The Wolf's Curse, you indicated your publishing journey was fairly long and winding. How did that journey prepare you for writing The Rabbit's Gift?

Long and winding, indeed! I wrote five manuscripts over the course of 13 years before I landed my first publishing deal. The good news is that during that time, I grew tremendously as a person and as a writer. This proved useful because I wrote The Rabbit’s Gift at the end of 2021 and the beginning of 2022; it’s safe to say that the pandemic had drained much of my creative well. Where it usually only takes me about a month to write a first draft, It actually took me several months to draft Rabbit. Rather than panicking, I gave myself the space to take it slow, knowing that I had the skills I needed to finish the story.

What do you hope young readers take away from this book--more than anything else?

It wasn’t my intent for this book to offer answers so much as to encourage kids to ask questions. What does it mean to be a hero or a villain? What role does family play in our lives? Tradition? What obligation do we have to protect the natural world? To take care of each other? If kids come away from my book excited about the story and making connection to their own lives, I will consider the book a success.