Holly Schindler Interviews the Young Authors of A Call to Arms

Before the pandemic, the students in Ben Maisel's class at  McAuliffe Elementary brought my book The Junction of Sunshine and Lucky to the stage. It was truly amazing stuff--the class adapted the book as a play, created folk art sculptures for the set, and allowed me to watch both productions online! It was a complete joy.

It was also a joy to hear from two of those students a while back, and hear that they were in the midst of writing and publishing their first book! A Call to Arms is available now; I'm delighted to interview the two authors (Arjun R. and Rowan S.) here at Smack Dab: 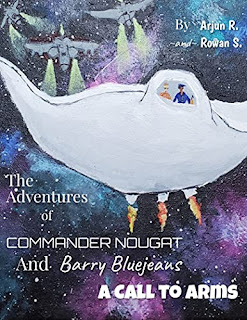 Congrats on the release of your first book! In the publishing world, we talk about “elevator pitches”—super short descriptions of a book. Can you summarize A Call to Arms in a sentence or two?

A Call to Arms is a short, comedic, sci-fi adventure starring Commander Nougat and Barry Bluejeans, as they fight against the evil Blargs.

Tell us all about how this all got started. Whose idea was it? What made you want to write a book?

One day, after school ended, Arjun invented a game where we pretended to be in space fighting against imaginary enemies with our blasters. We decided to name the characters in the game Commander Nougat and Barry Bluejeans. We liked the idea of the game so much that Rowan said “Why don’t we write a story about this?”

We had tried writing together a few times before in school and we really enjoyed it, so we figured we would enjoy making this together. We never expected it to become a full-fledged book at that point, but here we are.

What was the writing process like? Did you ever hit a wall / get writer’s block? How did you push through it?

Well, the writing process was more than a little bumpy, and several times we got writers’ block, especially near the ending of the book. But eventually, we managed to wrap it up nicely, by using freewrites, mapping the story, and discussing different sequences of events. Because we are good friends, it made writing the story a lot more fun. We kept each other going, and without the other person, each of us alone might not have written or finished the story.

How’d you come up with the cover?

We didn’t. Our good friend, Lea, did. She read the draft, and decided to illustrate one of the scenes on the cover. Can you guess which scene it is?

What was the hardest part of writing and publishing?

Getting people to read, review and edit and then help us publish was probably the hardest part for us. This took us almost a whole year where we learned a lot and had to practice patience and persistence.

What was the easiest part?

The actual writing of the story was probably the easiest part. It kinda just flowed out. Sometimes we each worked on our own paragraphs, and edited the other person’s, which made things a bit easier, but mainly we worked together, and it was much easier and fun for both of us.

What was the most surprising part?

Probably the actual publishing. We didn't really ever expect to publish at all.While we were writing we talked about it, but we didn't take it seriously at the time.

Would you do it again? (Or, what are you working on now?)

We might. We ended the book in a way that could lead to another story, making a new series. At this point, we aren't entirely sure whether we should, and whether we’ll have enough time.

What advice would you give other aspiring writers?

Freewrites can help a lot with writer's block. When you freewrite you can write random bits of storyline for your book, and then if you come up with one that fits well, you can put it in the book.

Also, if you make a timeline of events, or a map of the story, it can really help you link everything together and be consistent. Procrastination was hard to overcome and it took us almost a year to finish the book, so hang in there and don’t give up!

That's some of the best advice on pushing through writer's block I've ever heard! That's so true about timelines / mapping.

Don't hesitate to grab a copy of A Call to Arms!