Here's the most freeing lesson I've learned about writing:

You really don't have to just push through it.

I used to think you did. I used to treat hard parts in writing like running. I used to tell myself I had to just keep moving, even though everything was hurting, because at some point, I was bound to get a second wind.

Seriously. You don't have to do that.

In writing, if it's painful, something is probably going wrong.

So stop. Instead of just plowing ahead, sentence after sentence, ask yourself what you want to do. Which direction your heart is calling you. Is it to a specific scene that probably isn't going to come for another fifty pages? Skip ahead! Write it! Are you thinking about a past chapter? Something just doesn't seem right with it? Play a game with it--turn it inside out. Brainstorm new possibilities!

Here's another one: Are you thinking of another idea? One that seems far more fun than this current project? Take a day to play with it! (Also: I've heard other authors say they sometimes work in one day a week for fun projects that have nothing to do with the current WIP--a day for poetry or a picture book or a short story, etc.)

Maybe your heart's calling you toward some new promo idea. Do it!

Are you sick of your surroundings? Take a page from me and Gus's book and head outside! 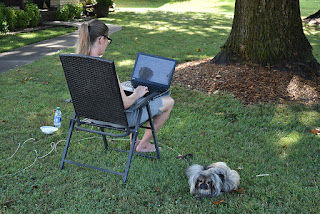 It can be hard to get motivated when you're midway or so through such a big project. Don't hunker down. Don't just push through it. Mix it up!