Doodles To The Rescue -- by Jane Kelley

When I started my first MG novel, Nature Girl, I was just as naive as my character. Megan thought it would be easy to hike twenty miles on the Appalachian Trail--even though she had hardly any food or water, no camping gear, and no real knowledge of how to survive in the wilderness. That pretty much described me too (although I did have food and water). I also had some excellent advice. My husband and daughter were early readers. My agent Linda Pratt understood my novel and was very wise about the publishing world. Before Linda matched me with my excellent editor Shana Corey, I got a great suggestion from another editor.

Your character is alone through most of the book. Can you give her something to do?

Alone? Of course she's alone! That's the point! Megan discovers her inner strength by reaching her goal on her own. But her solitary journey was also a problem. When she was alone, with just her thoughts and that yucky voice, she became one note.

In early versions, Megan only doodled during "Art Time." Doodling was just something else she didn't like about herself. It never occurred to me to let her continue to draw her adventures. Those additional doodles helped the book in so many ways.
Megan's sketches became a dialogue with herself. In this one, she is imagining the happy ending to her story. This is pretty important because the reader needs to know that Megan isn't lost or running away. Megan has a positive reason for what she's doing. Oh--and Megan needs to know that too!

Megan was wrong about her doodles. They weren't just trash, as she thought. Art isn't only something that hangs on a museum wall. Art is anything that encourages us to look at our world in a new way. 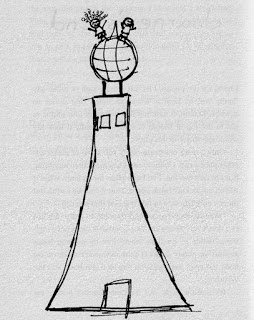 By the end of Megan's journey, she has accomplished her goal. She has arrived at Mount Greylock. She is a stronger, better person. In reality, she can't stand up on top of the monument and she won't meet her friend for a few more pages. But this picture shows us how she feels--on top of the world.

In fiction we always strive to show not tell. Even if you don't have an amazing illustrator like Heather Palisi, you can incorporate visual thinking in your story. Art will add dimension and perspective. Art takes us outside of ourselves. Maybe most importantly, art is fun. 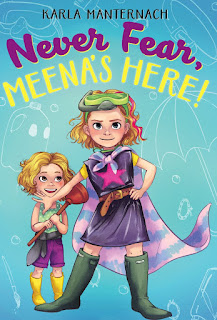 There are many great books in which characters make art. One of my favorites is Meena Meets Her Match by Karla Manternach. The sequel, Never Fear, Meena's Here, will be out later this month. I'm eager to read how Meena continues to turn trash into treasure to transform her world.