On Becoming a Writer, by Michele Weber Hurwitz

This month we're blogging about family stories and journals, and how they relate to our writing. Like many authors, I've kept journals when I'm thinking through a work-in-progress, and I've also pulled several tidbits from family stories and memories when I'm creating characters and events in my books. I've drawn from a cranky old neighbor on the block where I grew up who used to yell at kids for running through her garden (sounds like a fairy tale but it's true), to my two older kids' combative but deeply loyal relationship.

When I visit schools, I tell kids a true story about becoming a writer. As the oldest of three, I was the designated babysitter when my parents went out for date night. Keeping my two energetic and often wild younger brothers in line was no easy task. As soon as the car backed out of the driveway, my brothers started acting up. The arguments always centered around which TV show to watch (one TV, no streaming, no laptops), and usually ended with one pummeling the other. And a bloody nose. Or two. 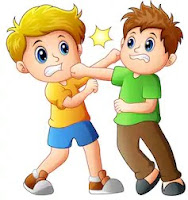 So as a kid who loved to read and write, what did I do, after I realized it was futile to try and stop my brothers from fighting? I grabbed a piece of notebook paper and a pencil and wrote it all down. From the beginning of the argument as the sun was setting and ominous shadows fell across the kitchen floor, to the fight and the bloody nose (and how I stopped the bleeding). I left these notes for my parents to read when they returned home - with the suggestion of who was at fault and who should be punished.

But more than reporting on what occurred while they were gone, these were stories. My first stories. They contained a vivid setting, tension, action, a climax, and a resolution. My mom even kept one of the notes, and I read it aloud at school visits and ask kids if they think it sounds like a story. They agree that it does, but can't seem to understand the TV show argument :)

I often think back to these early first "stories" I crafted and try to keep their honesty, simplicity, and sincerity in my heart when I write today.

Michele Weber Hurwitz is the author of four middle grade novels from Penguin Random House and Simon & Schuster. Her fifth novel, Hello from Renn Lake, will be published in May 2020. More at micheleweberhurwitz.com.