Notes from India by Jane Kelley

Ganesha -- The Remover of Obstacles 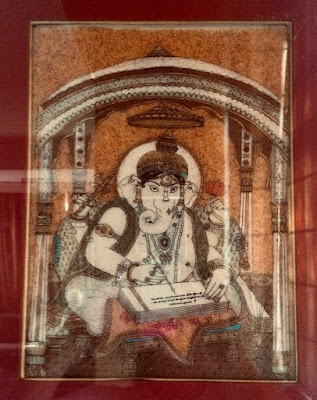 This illustration hung on the wall in the first place we stayed in New Delhi.

I recognized the Hindu god Ganesha, but I had only a superficial understanding of who he was and what he meant until I traveled to India.

I photographed the illustration because Ganesha is writing. That seemed propitious, even though I expected just to record a few observations and events in my travel journal.

Ganesha had a much more important task. The sage Vyasa had conceived of the sacred epic Mahabharata. He asked Ganesha to write it down.

Ganesha agreed, on one condition. Once he began to write, he would not stop.

Vyasa knew how long his epic would be. One hundred thousand verses would be needed to tell the story of a divided family. Their conflict over who will rule results in a catastrophic war that will destroy the world. Amidst the battles and the romances are meditations on the meaning of life. Why haven't we learned to be better? Why are we trapped in cycles of greed, power, and revenge?

The Mahabharata was important; Vyasa accepted Ganesha's terms. But he imposed another condition. Ganesha would not write down anything he did not understand.

And so, over 4000 years ago, Ganesha transcribed the story Vyasa told.

Their conditions confused me. Why write without stopping? Why pause until you understand? The more I thought about them, however, the more sense they made.

Ganesha is also known as the Remover of Obstacles. He blesses new projects. He certainly understands the power of momentum. We must keep going in order to finish. And so he wanted only to write write write. Even when he lost his pen, he broke off one of his tusks and dipped it in ink in order to keep up his pace.

Yes, persistence is important. But that isn't all that matters. It would be foolish to write anything down until we have grasped its meaning.

Ganesha had more to teach me. Look at the illustration again. He has four hands. He can hold more than his book and his pen.

His trunk has flexible power so he can adapt. His big ears require him to listen more than he talks. His big head is full of wisdom. His big belly is large enough to take in the pleasant and unpleasant experiences of the whole world. His small eyes show how he concentrates on his task.

Ganesha needed all those powers to complete the Mahabharata. My project may not be quite as important, and certainly not as long, but I know it will be better––if I write without stopping and pause until I understand.