What Are We So Afraid Of? - by Chris Tebbetts

One answer—and some would say the only answer, ultimately—is fear.

Resistance to the creative process takes on a lot of forms, but if we’re boiling things down to their nature or essence, FEAR is a good one-word candidate, evidenced in part by how much has been written about it.

Writing is apparently a very scary thing to do. So…what are we so afraid of?  Plenty, as it turns out. 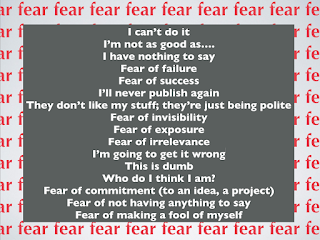 But as I’ve dug into this topic and read various takes on it, I’ve also found three responses to fear (and our relationship with it) that I like very much, and have found helpful.

I love this notion. For me, it’s truest in the middle of the night. That’s when my career always seems to be crashing and burning around me in the most convincing way – probably because I’m a captive audience, lying there in bed, where darkness turns my vision inward while I try to get back to sleep. 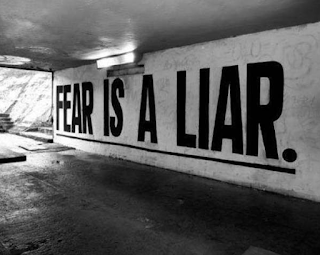 And maybe 3AM isn’t your problem. But for anyone who wrestles with this kind of thing, in whatever form, I encourage you to take a look at when you’re the most vulnerable to the lies you tell yourself. For me, last year was when I finally started to see those late night moments for what they are --- illusions that nearly always go away in the day, and usually because getting back to work is the perfect antidote.

That awareness is no miracle pill, but it helps a lot. As Lawrence Block wrote:  “Once we are aware of our fears, we are almost always capable of being more courageous than we think. …. Fear and courage are like lightning and thunder: they both start out at the same time, but the fear travels faster and arrives sooner.”

In The Courage to Write, Ralph Keyes says, “It’s important to distinguish between toxic and nutritious anxiety.” He refers to "page fright," our version of "stage fright," and the energy it can bring to the process.

The difference, I think, is between putting fear into the story—using the present writing moment to capitalize on that energy, even if it makes me uncomfortable--and, on the other hand, dealing with those future-minded fears, the ones that are based in all kinds of stuff I can’t know or control.

Anne Graham, daughter of Billy Graham, spoke about fear in a TED Talk radio hour podcast I heard.  She spoke about it as a natural, even necessary, companion on the way toward (in the case of her examples) enlightenment. But I’d extend that to the kind of truth-seeking we do in storytelling as well.  She spoke about Muhammed receiving the Koran—what she called the core mystical moment of Islam; and about Jesus on the cross in his last moments.  His final words, she says, were “Father why have thou forsaken me?” Muhammed, she said, “was held not by conviction but by doubt.”

These were moments of trembling and fear, not elation or enlightenment, even though that’s exactly what these people or characters, were on the cusp of.

"Abolish all doubt and what’s left isn’t faith," she says, "but absolute heartless conviction.” The results, for us, might be a didactic or even soulless story. In religion, it’s fundamentalism.

I love that quote--and I love that it came, for me, from a somewhat unexpected place.

Fear—the non-nutritious kind—is mundane. In Big Magic, Elizabeth Gilbert explains it like this:

“If you pass your hand over a petri dish containing a tadpole, the tadpole will flinch beneath your shadow. That tadpole cannot write poetry, and it cannot sing, and it will never know love or jealousy or triumph, and it has a brain the size of a punctuation mark, but it damn sure knows how to be afraid of the unknown.

“So do we all. But there’s nothing particularly compelling about that. Do you see what I mean? You don’t get any special credit, is what I’m saying, for knowing how to be afraid of the unknown.”

I love the practicality of that advice, as well as the reminder that it's something so many of us work against, and, ultimately, share.

So there it is. I don’t have a tidy conclusion to this blog entry. Nor do I even aspire to rid myself of all my writing fears. Given some of what I’ve read about it, I’m going to let myself hold onto at least some fo the energy it brings to the process. But I am going to continue to try—always—to put, and keep, fear in its proper place.

Easier said than done, I know. But then again, so is writing.