Skip to main content
Labels
Posted by Trudi Trueit May 05, 2013

I Can't Hear You! by Trudi Trueit (May Theme)

When I was eight years old, a teacher told me, "You can't be a writer, because you have poor vision and terrible handwriting."

When I was 14, another teacher told me, "You can't be a journalist because you are too timid to interview people."

Instead, I convinced my hometown newspaper to let me write a column for teens. I discovered asking people questions helped me overcome my own shyness. I took yearbook, newspaper, and three years of high school debate. In my senior year, I won a trophy in individual persuasive speaking at every tournament I entered. 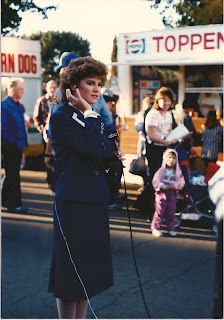 When I was 20, a college professor told me, "You can't be a TV reporter because you are not pretty enough."

Instead, I did internships at several Seattle TV stations and won an International Radio and Television (IRTS) fellowship to work for a summer at WINS Radio in New York City. Right out of college, I was hired as a TV news reporter and weather forecaster.

More than a decade ago, when I began writing fiction and nonfiction for children, people told me, "You can't be a professional writer. You'll never get published."

Instead, I started writing. I read books about the craft of writing, collected tons of rejection letters, and wrote and wrote some more until, finally, an editor said 'yes.'

Throughout my whole life, people have been telling me what I can't do, which only infuriates me and makes me more determined to prove I can do what they say is impossible. And so can you. I'm not any more skilled or talented than any other writer. I'm just stubborn. I've learned that perseverance will take you farther in this life than any other attribute.

So don't give in.
Don't give up.
And above all, don't listen.

Trudi Trueit is the author of 80+ fiction and nonfiction books for children. Check out the trailer for her newest tween title, Stealing Popular (Aladdin MIX), and visit her website at www.truditrueit.com
Labels: May theme Stealing Popular Trudi Trueit