There was a show on PBS in the late 70s, early 80s. It featured one or two children’s books per episode. A narrator would read a passage from the book while an illustrator drew the scene being read.

What was the name of that show? *

Without a real name, I tend to think of it as the Show That Changed My Life. It was where I got all my book recommendations from. Every book they described sounded awesome (except for the ones that involved Man vs. Nature; never was a fan of CALL OF THE WILD type books). As soon as each episode ended, I would hightail it to the library and check it out. 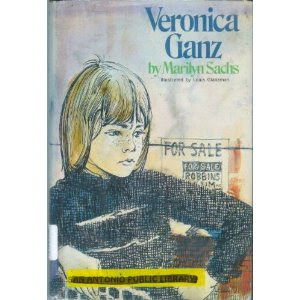 A book I remember very vividly from this show was VERONICA GANZ by Marilyn Sachs. The narrator read from the beginning of the book, which opens with a boy named Peter Wedemeyer chanting, “Veronica Gaaanz, doesn’t wear paaaants!”

When you’re in fourth grade and someone on the TV in your classroom is talking about someone not wearing pants… Well, trust me. It is High-larious.

That alone made me want to read the book. And what I read was a revelation. It was about a bully. A GIRL bully. I had only every dealt with the boy variety.** The idea that a girl could be a bully was imponderable.

But it wasn’t just this new take on bullying. This was the first book I remember reading where I really noticed the characters. How vivid they were. How real. This was a book set in a very tangible New York City. It was a book about how adversaries didn’t always have to stay adversaries. It was about why some people became bullies.

I can’t tell you how many times I re-read that book. And then I found the sequel, PETER AND VERONICA, which detailed the burgeoning friendship between the former bully and her former nemesis. (And also introduced me to Judaism. Again, slack cutting is necessary. I grew up in Central Wisconsin with nary a synagogue in sight.) 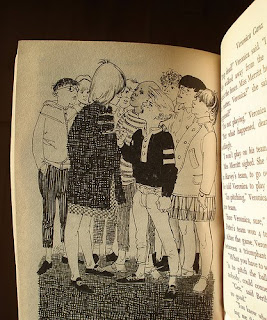 Through the miracle of eBay, I own the same editions of the books that I read all those years ago. I need those editions. The illustrations by Louis Glanzman are forever burned in my mind. Sometimes, y ears later, books get new editions/new printings and the illustrations change. And nothing against the new illustrators but it’s always those original drawings that send me back to fourth grade and make me want to read the book all over again.

Flash forward several thousand years to 2007. The publisher I work for, Flux, is re-issuing a Marilyn Sachs book from the early 80s called THE FAT GIRL. I’m the publicist assigned to the book. I get to work with the woman who introduced me to Veronica and Peter all those years ago. Do I remain professional and distant? Of course not. I go total fanboy on her (and probably scared her a little). Mainly, I got the chance to tell her how much her work meant to me. Which was pretty awesome.

Although my debut MG series is a fantasy, I dabble in realistic MD too. And in many ways, I think Sachs is my role model for that. She talked about things that, to my knowledge at the time, no one else was talking about. If there's something better to aspire to, I'm not sure what it is.

*=Seriously, if you remember the name of the show, I need to know.

**=My last name is Farrey, pronounced Fairy. I’m going to let you guess to what extent I had to deal with bullies.