Skip to main content
Labels
Posted by Alan Gratz May 21, 2011

A confession, and an embarrassed appreciation 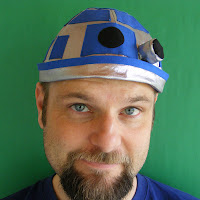 Alan Gratz here, author of the brand-spanking new Fantasy Baseball, in which I pay homage to dozens of characters from classic children's books. (Hundreds? I lost count in the rewrites.) The logical assumption then would be that I knew and loved all these characters as a boy, and that Fantasy Baseball was my way of reliving a childhood spent with my nose in books, right?

It's confession time: I didn't read much as a boy. I was good in school, enjoyed the books we read for class, and was already writing stories in second grade. But read for fun? When a book wasn't assigned?

It didn't happen much.

I was too busy. I was busy building forts in the woods, or playing kickball in the street, or inventing a country with my best friend Donald next door, or attempting some new business venture in the neighborhood. Inside, I played Atari, or, later, Nintendo. I played board games. I played with action figures. I built with Legos.

But I didn't read a lot of books.

I did read a few, here and there. I remember reading The Hobbit way to early too understand what was going on. Same with Hitchhiker's Guide to the Galaxy (most of which went screaming over my head in fourth grade). I do remember reading and loving The Phantom Tollbooth by Norton Juster, and that's my stock response when I get asked the "What was your favorite book as a kid?" question on school visits.

But when I decided to admit here on the Smack Dab in the Middle blog about not reading much as a kid, I also decided to come clean about something else.

My favorite books when I was a kid were illustrated classics. 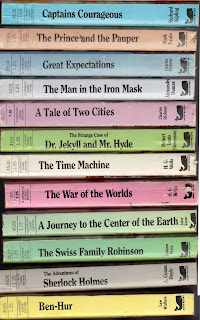 They were these little paperbacks published by an outfit called "Moby Books." Five inches by four inches. Kid-sized. They weren't illustrated like today's graphic novels. "Illustrated" back then meant there was a black and white line drawing every few pages. The titles promised musketeers and courageous captains, time machines and journeys to the center of the Earth.

And the covers! The covers were even better. Full-color woodcut-style prints with great white whales, pipe smoking detectives, Indians, ghosts, mad scientists. I was a red-blooded American boy. How could I resist? 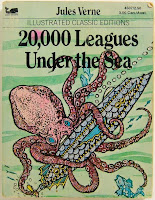 Now, books with illustrations are nothing at all to be ashamed about. I still read (and love) comic books and graphic novels today. That's not the shameful part about all this.

It's that they were abridged.

Even now, I shudder at the thought. Abridged editions! Of classics! The former English teacher in me cringes. Abridged books are like Charlie and Algernon after the IQ tripling surgery wears off. Like Tony Makarios separated from his daemon. Dare I say they are the Mr. Hyde to the original's Dr. Jekyll?

But eight year old me didn't care. Eight year old me loved the stories, and had no idea the originals were better, had more depth, were art, not mere potboilers. And I wouldn't have cared if I had known. The Moby Books editions excited in me a passion for story and, perhaps more importantly, the idea that books were things wherein amazing stories were to be found. 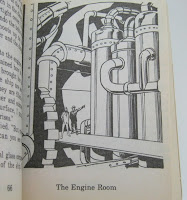 Later in life, I sought out the original books behind the titles. (Most of them, at least. I've still never read Moby Dick, notably.) It was only then that I realized these books had so much more to offer.

But then, the whole reason I was reading as an adult was because those Moby Books had already worked their magic: they made me a book lover, no matter how late I had bloomed.
Labels: Alan Gratz