What I DIDN'T Learn ... by Jane Kelley

This month's topic sent me digging through the actual folders in my actual filing cabinet. My first completed children's book manuscript was typed and mailed to an editor in the year 1984.

I wrote BERT TO THE RESCUE at a time when I was also writing plays, short stories, adult novels, essays -- basically anything I could think of in hopes of success. I had no idea what I was doing. No plan. No mentor. Just a naive belief that somehow or other success was around the corner. 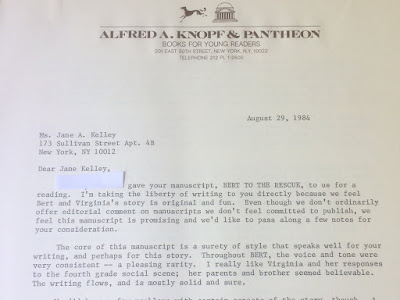 I remember being thrilled by this response -- even though, despite the praise, the envelope also contained my manuscript.

I incorporated the advice as best I could and resubmitted "Bert." A few months later, "Bert" came back, rejected once again, with more feedback from more editors.

So, dear readers, I'm sure you think that I immediately wrote another middle-grade novel, which was much much better because of the advice given to me by those three editors, and sent it to the first editor who had asked to see more of my work.

Nope. Instead I wrote more mediocre adult novels and esoteric plays, and half of a cancer memoir. None of which ever received half the praise that "Bert" had.

My husband used to encourage me to take another stab at fixing "Bert." But I always told him that no one had any interest in a novel about an imaginary cat. 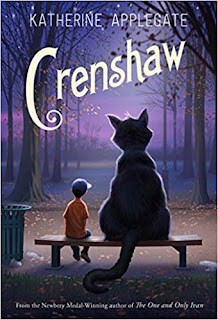 Looking back, what do I wish I had learned then--instead of twenty years later?

Learn how to absorb criticism.

But above all else, keep writing.